29 minutesVertonghen tests the quality of Keita’s shirt in midfield and shoots vehemently at the red fabric – result: good quality, but foul play, at least no warning for the defender.

27 minutesWeigl slides into space on the right side of Benfica’s box, giving Diaz space to shoot – the striker’s hard but misplaced shot, Vlachodimos saves for the following corner.

26 minutesWhat magical football nights haven’t already happened at Anfield – but do Benfica still have a chance to progress? ! Very questionable.

23 minutesAlmost fast compensation! Everton shoot down the right for Nunez, who puts the ball into the Liverpool goal from an inside right position, but the goal is immediately disallowed – offside. 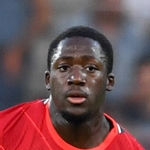 Goooooooooooooor! LIVERPOOL-Benfica 1-0! And it’s in – and again it’s Konaté! The central defender, who scored with a header from a corner in the first leg, comes back after a corner from Tsimikas in the fifth, stands for a moment in the air and heads to the left. No more chance for Vlachodimos.

20 minutesReds kick into high gear, Diaz runs down the right flank, yanks from the edge of the box – Vlachodimos pushes the ball past Henderson. It was closed.

17 minutesIn this scene, Jota has kneeled Vlachodimos frontally, which is why the Greek is now treated on the temple. Doctors are already giving a thumbs up.

16 minutesInvited by a Lisbon misunderstanding between Gilberto and Otamendi, Liverpool can combine for the first time. Firmino releases Jota on the left in the penalty area, who can no longer pass the ball past goalkeeper Vlachodimos.

14 minutesNot bad either: Everton try to get away from goal with an inside shot on the right – Alisson steals, the ball sweeps half a yard past the left post.

12 minutesNunez again on the left wing and with a quick run past Matip. The striker scratches the ball from the back line and wants to put it in the middle – Henderson beats Everton and (unintentionally) directs the ball into Alisson’s arms.

10 minutesJota slides down the left feigning a cross, moments later Gomez on the right side of the box – the lawn at Anfield Road looks well watered.

8 minutesNote that Liverpool still have to find their way, the processes – especially in the opposing half – are not yet developed. No wonder with six changes in the starting XI.

5 minutesWeigl with a short unclean pass to Taarabt, which Jota intercepts, but fails to launch a quick Liverpool counterattack.

4 minutesNunez moved to the left wing for the first time and looked for Everton with a cross from the right, which started offside.

2nd minuteThe Reds of course in the red home shirt, Benfica in the white away shirt with black shorts. By the way, the referee for today’s match is Serdar Gözübüyük.

Before the start of the gameGoing forward, the winners of this pair would meet Villarreal in the semi-finals and have home advantage in the first leg. The semi-finals will be played on 24./25. April and 03./04. May.

Before the start of the gameWith Liverpool still playing for the league, FA Cup, Champions League and already won league cup treble, the premier league is the last straw of the season for Benfica. In the league, the Eagles are 15 points behind leaders Porto, who also finished early in the cup.

Before the start of the gameLiverpool manager Klopp described the 3-1 first leg victory as a “good basis”, but the game would change immediately if Benfica scored a goal. But Klopp certainly doesn’t want to rest the players – not even in the context that next weekend it’s again against Manchester City and then in the FA Cup semi-finals.

Before the start of the gameThis weekend, Benfica secured an undisputed 3-1 win over city rivals Belenenses. Liverpool struggled to draw 2-2 with Manchester City in the Premier League’s best game.

Before the start of the gameIn the first leg last week, Benfica held up well against the Reds but ended up being beaten 3-1. Konate and Mane gave Liverpool the lead, Nunez brought the Portuguese back in the meantime and Diaz made the final just before the end.

Before the start of the gameThere are five changes at Benfica after their weekend game against city rivals Belenenses: Gilberto, Vertonghen, Grimaldo, Weigl and Ramos start for Almeida, Morato, Lazaro, Meite and Mario.

Before the start of the gameKlopp changed the Reds to six positions from the game against Manchester City last weekend, including almost the entire back four: Gomez, Konate, Tsimikas, Keita, Milner, Firmino and Salah start for Alexander-Arnold, van Dijk, Robertson, Fabinho, Thiago, Salah and Mané.

Before the start of the gameWelcome to the second leg of the Champions League quarter-final between Liverpool FC and Benfica.