Russia wants to blame Ukraine for the deadly attack on Kramatorsk station. But the alleged evidence of their own innocence does not stand up to scrutiny.

A serial number on the remains of the rocket would be one of the supposed evidence: Russia wants to wash its hands of last Friday’s devastating attack in Kramatorsk, eastern Ukraine. Moscow and pro-Russian activists are currently trying to portray the attack on a train station that left at least 50 dead as an action controlled by kyiv.

Allegation: The Tochka-U missiles, the wreckage of which was found near the station, are used only by the Ukrainian Armed Forces.

Evaluation: Not right. Russia and its ally Belarus also use Tochka-U missiles.

realities: kyiv and Moscow now blame each other for the deadly rocket attack on Kramatorsk station. Initially, several pro-Kremlin channels on Telegram and the Ministry of Defense complained about the attack on the station for Russia. It was not until shortly after that they deleted or changed their statements and moved on to their current position.

One thing is certain: a Totschka-U version 9K79-1 was used in the attack. Several states of the former Soviet Union, including Ukraine and Belarus, have this type of missile, introduced in the 1980s.

True, the Russian army officially replaced its arsenal with the newest Iskander. In the Ukrainian War, however, there are several pieces of evidence that Moscow is still using the Tochka-U. According to the humanitarian organization Amnesty International, a Russian attack with this type of rocket against a hospital in Wuhledar took place on the first day of the war. There are also reports of sightings of Russian Tochka submarine missiles in Ukraine. According to the conclusions of the American think tank Institute for the Study of War, a Russian unit deployed in the Donbass is equipped with it.

Allegation: Based on the serial number of the Tochka submarine, the missile can be traced to the Ukrainian military.

realities: Serial numbers were assigned during production in Soviet times. The projectiles are now old and stored in several countries of the former Eastern bloc and in Syria, for example. There is no convincing evidence to support the claim that the serial number order was followed during distribution – as pro-Russian activists claim.

Attacks, fugitives, nuclear power plants and proportion of gas: graphs on the conflict in Ukraine 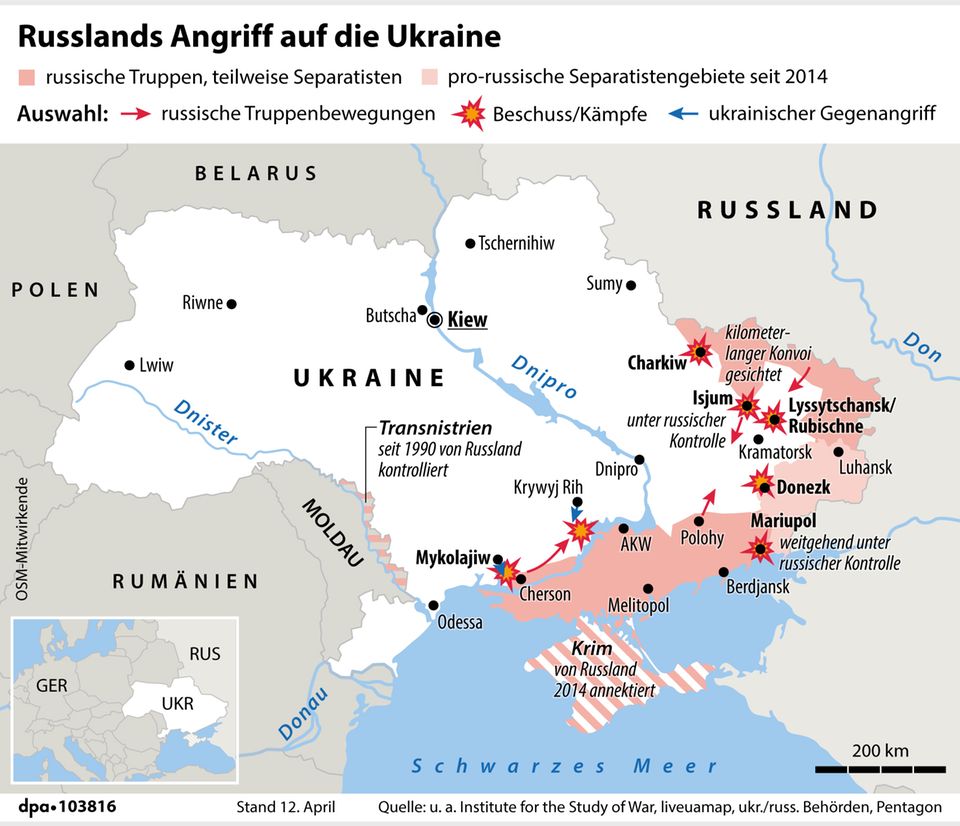 “After the collapse of the USSR, there is a ‘black hole’ of a few years without any information on which missiles remained in which countries, or which systems returned to Russia”, explains Lieutenant-Colonel Frederik Coghe of the Royal Military Academy of Brussels. the German Press Agency (dpa). “Serial numbers mean nothing without listings of which serial numbers are in which countries.”

Even consecutive numbers don’t have to be from the same countries, Coghe says. There could be 13 in the Ukrainian arsenal, 14 in the Belarusian and 15 in the Russian arsenal. According to Coghe, it was a coincidence which country received which serial numbers.

Claim: The remains of the missile on the ground make it possible to unequivocally conclude that the Tochka-U was fired from territory under Ukrainian control.

Evaluation: This cannot be read unequivocally.

realities: Proponents of this claim argue with ballistics. The Rocket Engine is less than 100 meters southwest of Kramatorsk Station. Some conclude that the rocket should therefore have been launched from that direction as well. These areas are under the control of Ukrainian forces.

A ballistic missile like the Totschka-U accelerates only in the initial phase, then flies towards the target without power. In doing so, it falls as a whole from a great height onto the programmed target. At just over 2,000 meters above the ground, the fuse in the warhead of the Totschka-U is activated, as Munich rocket technology expert Markus Schiller explains to dpa. The tip of the rocket bursts and about 50 individual charges – also called cassettes – and the burnt remains of the rocket fall to the ground.

While the aerodynamic missile has flown stably up to this point, the remaining missile body loses this property after warhead detonation. “It sails about two kilometers like a leaf,” says Schiller. Although the direction of flight is probably still approximately maintained due to inertia, the tail can drift in any direction. “I would therefore be very careful before drawing any profound conclusions about the direction of flight from the position of the body of the hit missile.”

Lieutenant-Colonel Coghe also points this out. After detonation in the air, the rocket body likely follows its original trajectory. “The exact distance it flies depends on the height of the detonation and the type of ammunition the rocket is loaded with,” explains the Belgian expert. It is true that a line can be drawn between the point of impact of the body and the combat objective, which indicates the direction. “But it’s not an exact science.”

The location of the rocket launches on Kramatorsk is unclear

The Totschka-U 9K79-1 can have a range of up to 120 kilometers. Even though it was shot down from south to southwest of Kramatorsk, there are also Russian occupied areas within range. The city of Donetsk is located to the south, 80 kilometers as the crow flies. And areas roughly west of Donetsk were also under Kremlin influence on April 8.

This means that the position of the remains on the ground alone does not allow us to conclude with absolute certainty that the rocket was inevitably fired by the Ukrainian armed forces.