TELEVISION – Guest on the show It depends on you This Monday, April 18, Emmanuel Macron was particularly hammering in that even if the polls for the second round of the presidential election are in his favor against Marine Le Pen (55%-45%), nothing will be decided.

“Think back to what British citizens were saying hours before Brexit, or in the United States before the Trump vote: I’m not going, what’s the point? I can tell you that they regretted it the next day,” he stressed on the France 5 program. “So if you want to avoid the unthinkable or something that puts you off, make up your own mind.”

In a much lighter sequence (see below) at the end of the program, the President was kindly “joshed” by columnist Bertrand Chameroy, who, for about ten minutes, returned to some of his televised passages that did not really make him stand out, either for his attitude or for his linguistic elements.

President “put on hold” during press conference with Belgian Prime Minister, “hypnotized” during intervention by Jacqueline Gourault, mocked for his web seriesthe candidate or even king of certain moving statements during the Covid-19 pandemic… Bertrand Chameroy impishly brushes aside the little comic moments of Emmanuel Macron’s five-year tenure. The latter, a handsome player, often reacted with amusement to the images between laughs.

“The last time I cried that much was before the bear, by Jean-Jacques Annaud,” the columnist comments at one point after some moving excursions by the President. “There was even less dialogue!” Emmanuel Macron replies hilariously. “And it doesn’t hurt the music,” he adds.

The photo of the half-open jersey in Marseille

At the beginning of the sequence, Bertrand Chameroy returned to a recent photo of Emmanuel Macron, who traveled to Marseille for a meeting on April 16, where we see him sitting on a sofa with his shirt half-open, baring his hairy chest (see below). “I discovered you were trying to seduce the fans of BHL and Demis Roussos,” the columnist begins. 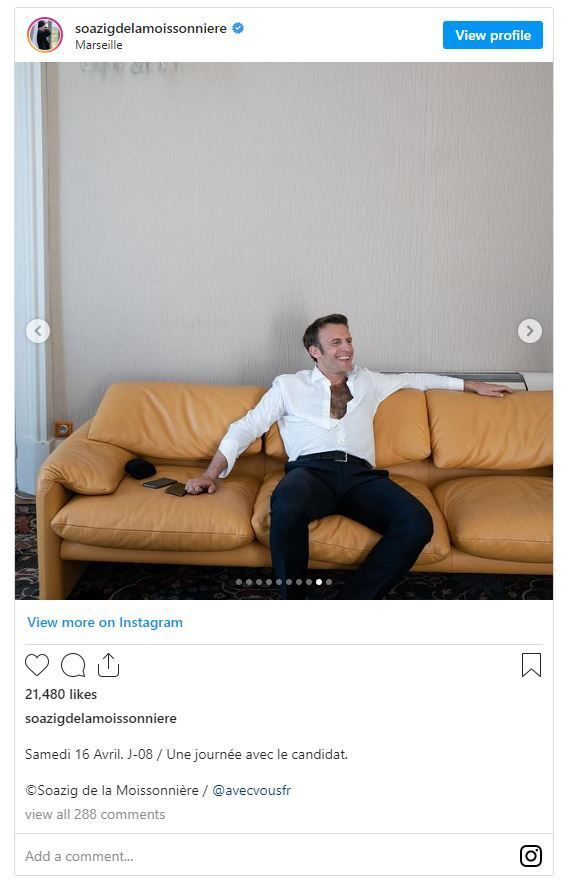 “As you have seen, it was very, very hot in Marseille. There are times when…” the presidential candidate responds.

“But did you validate it (this photo)?” asks presenter Anne-Élisabeth Lemoine.

“Well, I probably validated the series… This one went a bit fast, but if Demis Roussos fans are listening to us, maybe it can have an impact,” he replies, before adding with amusement, “And we can maybe have, what sociologists call the ‘secant marginal’ of Demis Roussos and Jean-Luc Mélenchon is perhaps a large reservoir of voices…”