The environmental impact of bitcoin mining has always been a topic of great debate in the community. Due to the amount of power consumed by high-powered computers and required to solve complex mathematical equations to confirm transactions, mining activities have been banned in some areas in an effort to protect the country’s energy supply. However, the proposed new form of bitcoin mining shows more promise of reduced emissions than wind and solar combined.

Oil drilling is one of the most active avenues of environmental pollution. During the process, natural gas is produced, and since harnessing natural gas for use has been ineffective, manufacturers often have to burn the natural gas produced on site.

Through a process called flaring, natural gas is burned into the air. However, what this does is it releases tons of carbon dioxide into the atmosphere, which leads to more emissions. Several solutions, such as wind and solar power, have been put forward to try to reduce emissions from the burning process, but none have been as effective as using natural gas from bitcoin mining.

A study from Cross Energy indicated that actually using natural gas for bitcoin mining was more cost-effective and reduced emissions by more than 500% compared to wind and even higher for solar. 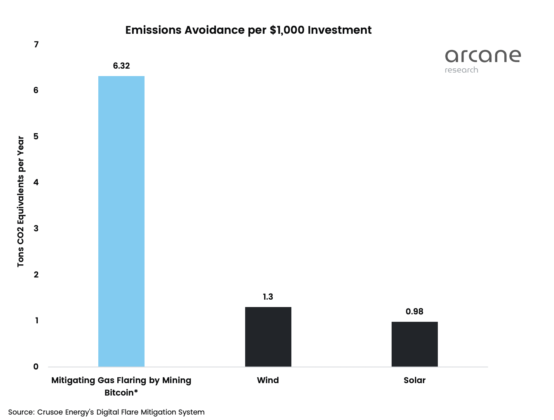 How this works is that bitcoin mining activity takes place at the site where natural gas is produced. It is able to take gas directly to use as energy for mining activities, providing more returns and lower emissions overall.

Roscoe’s study found that for every $1,000 investment in a bitcoin mining system using natural gas, emissions were reduced by 6.32 tons of CO2e. Now, to put this in perspective, both wind and solar energy reduce emissions by 1.3 and 0.98 CO2 equivalents for the same $1,000 investment. This shows that mining bitcoin using natural gas is not only a better cost-effective alternative, but also better for the environment.

If the natural gas generated from oil drilling can be channeled into bitcoin mining, the burning process can be eliminated. Since the gases are burned inside an electric generator with a controlled environment, the impact on the environment is greatly reduced. Add to the fact that bitcoin mining does not specify a location and can be set up anywhere, it offers a recipe for success.