The entire cryptocurrency scene has been struggling for most of the past year and 2022. However, the expansion of the industry has not slowed in the least.

Recently, nearly 4,000 trademark applications associated with the crypto and metaverse business have been filed.

Michael Kondodis, a trademark and patent attorney, stated in recent tweets that the number of crypto-related trademarks has gone up in the past few months.

From January to August, 3,600 cryptocurrency trademark applications were submitted, according to the tweet. This represents an increase of 2.3% from last year’s 3,516 filings.

However, the crypto industry has not seen the highest growth for brands. According to recent tweets from Kondoudis, NFTs, or non-fungible tokens, have seen the biggest increase.

So far this year, more than 5,800 trademark applications for NFTs (and related goods/services) have been submitted to the USPTO,” Kondoudis stated in recent tweets, adding that the 2021 total was 2,087. This data only includes from January to August.

Regarding the two values, the rise of NFT brands was nearly 280%, which is an impressive number. The recent increase in NFT trademarks can be attributed to the industry’s lack of intellectual property protection. 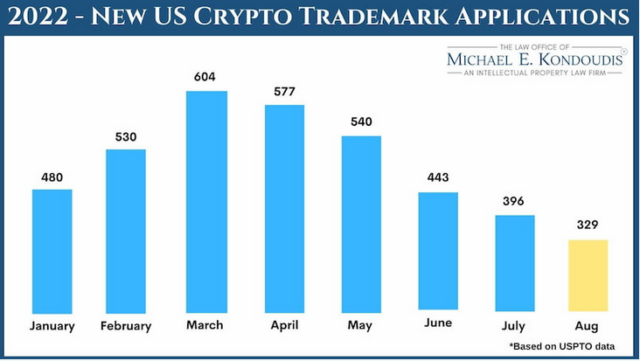 NFTs are the vehicle of the future in the art world. However, if there weren’t so many allegations about fake or copied artwork, the market would have performed better.

OpenSea tweeted on January 28 that more than 80 percent of artwork on the site had been removed due to the infringement. The rate of stolen NFTs will probably decrease if this legal guarantee is applied.

Metaverse and Web3 brands are rising as well

Dramatic increases in development are not limited to NFTs. The same is true for the Metaverse and Web3 brands, which have seen an amazing rise in popularity.

Facebook’s rebranding to Meta is largely responsible for the expansion. In general, the fascination with metaverses has increased since then.

The industries that are on top of the blockchain must evolve and improve along with the technology itself. While more efforts need to be done to protect intellectual property and investor confidence, this is a positive development.

This may conflict with the decentralized nature of cryptocurrencies. However, cryptocurrencies need safeguards against fraud and other threats as interest from other sectors grows.